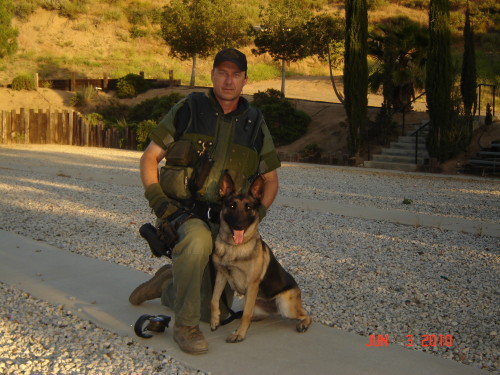 Daryl Gaunt began working with dogs by decoying for Inglewood PD in 1978. He also worked with the Los Angeles Schutzhund Club where he held the position of Vice President and Assistant Training Director. He then enlisted into the Army for eight years and was a military dog handler for four years. He worked as a Deputy Sheriff for Los Angeles County from 1991 to 2020 and was assigned to the Special Enforcement Bureau canine unit from 2003 until his retirement. He was a unit trainer since 2005 where he helped establish their Tactical K9 school.  During his tenure he worked three SWAT/patrol dogs including one cross trained as an explosives dog.  In addition, Daryl worked for Adlerhorst International from 2005 to 2019 as an instructor.  He is a California POST evaluator and has certified hundreds of dog teams from all over the country.  He has instructed military and civilian teams both in the United States and internationally.  He also was the West Coast Regional Director for the National Police Canine Association from 2017 until 2020 when he moved to Kentucky.  He remains active in the NPCA.

Scott Callendar found his love for working dogs as his Stepfather was a police dog handler.  Scott started attending police dog training while he was still a teenager.  Like Daryl, Scott also trained in the dog sport, Schutzhund.  Scott started as a member of the Arizona Valley Schutzhund Club in 1999, and later took over as the training director. In 1995 Scott started his career as a police officer with the City of Mesa Police Department.  During the earlier years of his career, Scott served as a patrol officer, and later as a member of the bicycle unit.  In 2001 Scott was transferred to the Special Investigations Division where he worked as an undercover narcotics detective.  After a short time in Narcotics, Scott was assigned to a high-risk surveillance/apprehension team.  Scott graduated basic SWAT school in 2004.  In 2008 Scott was transferred to Special Operations/Tactical Team as a dog handler.  During his K9 career, Scott worked three dual-purpose dogs.  In 2012 Scott was named one of two trainers for his department.  He ultimately took over as the head trainer in 2017.  During this time, the Mesa Police Department’s Canine Unit hosted its own basic patrol dog school.  The Mesa Basic Patrol Dog School not only provided basic training for all the Mesa Police dogs, but it was also attended by other Arizona agencies, and one out of state agency.  In 2015 Scott developed an annual high-risk deployment seminar in Arizona.  Several hundred dog teams from all over the United States have attended this seminar since its inception.  Scott retired from police work in 2020 after nearly 26 years of service.  In addition to his experience with the police department, Scott has been a member of the Arizona Law Enforcement Canine Association, where he’s been on the training committee since 2011.  Scott was also named Southwest Regional Director for the National Police Canine Association in 2015.  He held this position until 2020.  Scott was also employed by K9 Training Consultants from 2015 until 2020 where he worked as a dog trainer/instructor.  K9 Training Consultants held a contract training security dog teams for a large hospital group in Arizona.  Scott has also worked as a trainer/instructor for Paraclete K9 since 2017.  During his career, Scott has also had the opportunity to train with hundreds of police dogs across the country.